Assassination Classroom is the anime adaption of the manga with the same name that premiered January 9, 2015. The series is produced by Lerche and directed by Seiji Kishi. The anime is broadcasted by Fuji Television in Japan on the late Friday night slot and Funimation has also received the rights for internet, US streaming,[1] and a Broadcast dub which was released on February 18, 2015.[2] The first opening theme of the anime is Seishun Satsubatsuron (青春サツバツ論, Savage Youth Theory) by character VAs, Mai Fuchigami, Aya Suzaki, Nobuhiko Okamoto, Ryoto Ohsaka, and Shintarō Asanuma as a group named 3-nen E-gumi Utatan (Class 3-E Song Unit, 3-nen E-gumi Utatan) and the first ending theme Hello, shooting-star by moumoon.

The first news of the cast revealed the voice actors of Korosensei, Tadaomi Karasuma, and Irina Jelavić and[4] later, the voice actors of Class 3-E's students (minus Itona Horibe and Ritsu) were revealed. Among them was Nobuhiko Okamoto, Karma Akabane's voice actor, who of which is the only VA to reprise his role from 2013's OVA.[5]

An exclusive event OVA adaptaton of Assassination Classroom was produced by Brain's Base and premiered at the Jump Super Anime Tour 2013 on October 6, 2013 at its first stop in Sapporo. It was released on DVD on December 27, 2013 as a bundle with Volume 7. 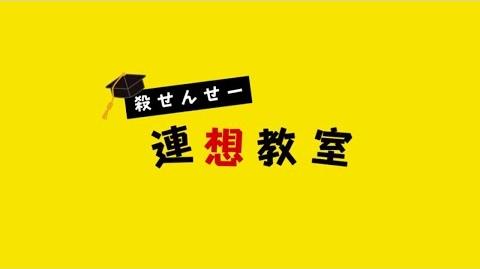 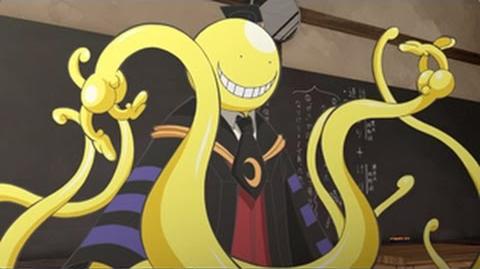 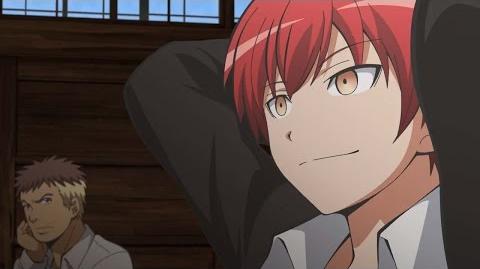