Kunugigaoka Junior High School (椚ヶ丘中学校, Kunugigaoka Chūgakkō) is the name of school which the students of Class 3-E attend.

Kunugigaoka Junior High is a prestigious private school located in Tokyo, Japan. It is renowned for being one of the top schools in all of Tokyo and has a high rate of successful students. The school itself is actually a gakuen (園, lit. academy) as it also has a high school that the students of Classes A-D enroll to through an escalator system and students from other schools enter through a transfer student exam.

Kunugigaoka has five core subjects; Math, English, Science, Japanese, and Social Studies. During End of Term Exams, each of these subjects is worth a maximum score of 100 for a cumulative maximum score of 500.

Kunugigaoka also has secondary subjects, such as P.E. and Home Economics.

The school houses a unique system known as the "E System", created by Chairman Gakuho Asano which is based on the 20:20:60 worker ant ratio; a social science which states that 20% of people are exceptional, 20% are worthless, and the other 60% are ordinary.

Students are required to excel in all fields of their education, or get transferred to a remedial class called "Class E". This system has been described as "a tried and true method"; designate one group as undesirables, and all the rest will do everything in their power to avoid being added to this undesirable group.

The system's ideal is to ensure that 95% of students are in the exceptional category, while only the remaining 5% are classified as worthless.

The system in Class A is that an incompetent teacher teaches the class straight out of the text book at high speeds. Whereas in Class E, the system is for a rookie teacher to try and fail to teach the students, keeping Class E at the bottom of the academic ladder. Of course, Korosensei actually does a good job of teaching the E Class students, helping them to learn in a way the each of them can understand.

The main building is shown to be a huge building with a spacious campus. The campus is reminiscent to a small college campus. It has four main stories, a gym, a baseball field, a track field, and a swimming pool. The main building itself also houses both Junior High and High School of Kunugigaoka.

Class E is located on a mountain about one kilometer away from the main building. Their classroom takes the appearance of a rundown/small school building that has basic classroom and school accommodations like a small faculty lounge, desks, a blackboard, and a field. It is a former classroom for Chairman Asano where he teach as a Cram School Teacher before establishment of his own Academy.

The standard boys uniforms gray trousers with a matching grey blazer with black-lined edges, a white button up shirt, and a black tie.

The standard girls uniform is basically the same, except they wear a grey skirt with black-lined edges, instead of pants. The skirts come in various lengths.

The students are also required to wear the school's standard issued loafers. Although, some students, mainly those in E Class where they can get away with it, wear sneakers instead.

The uniforms have several variations, as some male students wear a variation of the grey trousers that contain cargo pockets (i.e. Nagisa Shiota), and some students wear a light-yellow cardigan instead of the blazer. This does not include wearing your own jacket or sweater instead of the standard school blazer/sweater and wearing anything other than the standard school loafers (i.e. Karma Akabane) as these violate the dress code.

The Kunugigaoka P.E. uniform consists of a short sleeve shirt with a light-blue torso and blue sleeves and shoulders. Some students instead wear a tracksuit jacket of the same color scheme. The boys P.E. uniform uses long blue tracksuit pants, while the girls uniform uses thigh-length blue shorts and black leggings. Students wear white sneakers with their P.E. uniforms, rather than school standard loafers. 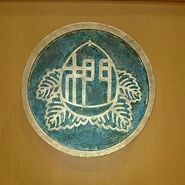 The school's emblem as seen in the live-action

Kunugigaoka entrance arc as seen in the live-action

Retrieved from "https://ansatsukyoshitsu.fandom.com/wiki/Kunugigaoka_Junior_High_School?oldid=36343"
Community content is available under CC-BY-SA unless otherwise noted.