Ben Phillips
Smog (スモッグ, Sumoggu) is one of three assassins hired by Akira Takaoka in Okinawa along with Gastro and Grip. He specializes in creating/making poisons.

Smog is a round-faced man with black hair, thick eyebrows, and narrow eyes. He has a big, flat nose, and, due to working with poisons, he commonly wears a mask over his face to protect himself from the poisons.

Smog has a very meticulous nature, which leads to his tendency to create all his poisons and diseases himself in his specially outfitted lab. He is also a caring man, providing aftercare to those who he has poisoned or infected but not killed on a job and refusing to use the real virus on the students after finding out that Takaoka never intended to the give them the antidote in the first place.

Poison Making/Chemistry: Smog is an expert poison-maker who is able to concoct his own unique and deadly poisons, viruses, and more. The ability also extends to medicine as he is able to make his own medication pills to combat the deadly virus (really a simple stomach bug virus). 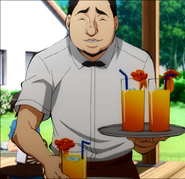