The Stun Clap, (猫騙, Nekodamashi) also referred to as the Clap Stunner, is a recurring combat technique in Assassination Classroom used to stun, or even temporarily paralyze a target.

The main usage of the Stun Clap involves the user clapping their hands together in front of their opponent's face in order to momentarily stun them. A typical stun clap (i.e. Lovro's) has three conditions that must be met for it to be used effectively:

Once all three conditions are met, the user would then walk toward the target at a steady pace, making the target focus on the weapon currently being held by the user. Taking advantage of the target's attention on the knife, the user would drop their current weapon and perform the stun clap. Once the target is disoriented, the user would subsequently draw out their second weapon to finally kill the opponent.

However, as noted by the Reaper, the Stun Clap can be further developed to temporarily paralyze the target. This advanced usage of the technique involves the understanding that the human consciousness has wavelengths; when the opponent's wavelengths reach its highest frequency (or peak), the user would then perform the Stun Clap, and in turn the opponent would be immobilized.

Along with the Stun Clap's reliable strengths come with its fair share of weaknesses.

As discovered by Nagisa, if the target's conscious wavelengths are erratic, the user would not be able to find the peak necessary to perform the Stun Clap.[1] Furthermore, the effect of the stun can be drastically negated if the target shifts their consciousness somehow - this was notably exploited by Karma, who bit his tongue in order to do so.

The Reaper (Korosensei) using an alternate version of the Stun Clap 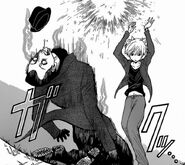 Nagisa paralyzing an assassin
Add a photo to this gallery

Retrieved from "https://ansatsukyoshitsu.fandom.com/wiki/Stun_Clap?oldid=32499"
Community content is available under CC-BY-SA unless otherwise noted.